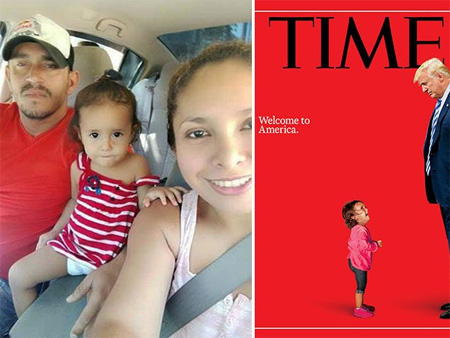 Throughout the entire mainstream media manufactured crisis of illegal immigrant children separated from their mothers at the border there has been a constant search for that one photo of a crying child who would be the face of the media’s feigned outrage.

TIME Magazine thought they had found that photo, when they published their latest issue and included a photo of a crying Hispanic child looking at President Trump with the caption “Welcome to America”.

It turns out, however, the crying 2-year-old was never separated from her mother, as the girl’s father revealed yesterday that “they’re together and safe”. In fact the girl’s father, Denis Javier Varela Hernandez, said his daughter and her mother are together in U.S. custody at “at a family residential center in Texas.”

In an exclusive interview with DailyMail.com, Hernandez, who lives in Puerto Cortes, Honduras, says that he was told on Wednesday by a Honduran official in the US that his wife and child are being detained at a family residential center in Texas but are together and are doing ‘fine.’

‘You can imagine how I felt when I saw that photo of my daughter. It broke my heart. It’s difficult as a father to see that, but I know now that they are not in danger. They are safer now than when they were making that journey to the border,’ he said.

Denis said his wife and daughter were never separated by border control agents and remain together.

The original image of the crying child came from a photograph taken in McAllen, Texas, when her mother was being searched by Border Control agents.

The child’s mother was apprehended due to the fact she was previously deported from the US in 2013.

A spokeswoman for Immigration and Customs Enforcement (ICE) has told DailyMail.com that Sandra had been previously been deported from the US in 2013.

The spokeswoman said that she was ‘encountered by immigration officials in Hebbronville, Texas’ in and sent back to Honduras 15 days later under ‘expedited removal.’

Sandra current immigration proceedings are ‘ongoing’ and she is being housed at a family detention center in Texas.

Denis said that his wife had previously mentioned her wish to go to the United States for a ‘better future’ but did not tell him nor any of their family members that she was planning to make the trek.

‘I didn’t support it. I asked her, why? Why would she want to put our little girl through that? But it was her decision at the end of the day.’

The child’s father, Hernandez, asks a valid question: “Why would she want to put our little girl through that,” in reference to the mother’s decision to take their daughter on a dangerous journey to smuggle themselves into the US illegally. Hernandez is currently living in his home country of Honduras, where he works as a captain at a port on the coast of Puerto Cortes.

Hernandez against his wife’s decision to take their daughter on a dangerous journey to illegally smuggle themselves into the United States, stating that he never even got a chance to say goodbye.

He said that Sandra set out on the 1,800-mile journey with the baby girl on June 3, at 6am, and he has not heard from her since.

‘I never got the chance to say goodbye to my daughter and now all I can do is wait’, he said, adding that he hopes they are either granted political asylum or are sent back home.

‘I don’t have any resentment for my wife, but I do think it was irresponsible of her to take the baby with her in her arms because we don’t know what could happen.’

The couple has three other children, son Wesly, 14, and daughters Cindy, 11, and Brianna, six.

‘The kids see what’s happening. They’re a little worried but I don’t try to bring it up that much. They know their mother and sister are safe now.’

Denis said that he believes the journey across the border is only worth it to some degree, and admits that it’s not something he would ever consider.

He said he heard from friends that his wife paid $6,000 for a coyote - a term for someone who smuggles people across the border.

The mainstream media and Democrats have yet to issue statement condemning the mother’s actions to separate a child from her father without even saying goodbye, which is odd considering their stated objective was to “keep families together” with their latest round of incendiary reporting.

Despite the fact that the vast majority of illegal immigrant parents are never separated from their children, and there are many cases of gang members using abducted children to pose as their own to get released into the country faster, the mainstream media continues to use false narratives, false photos and exaggerated feigned outrage to incite anger towards President Trump.

Even The Washington Post was forced to admit that TIME made a “major mistake” on their crying girl cover.

Unfortunately, they made their most iconic image something that wasn’t a family being separated — and ultimately undermines their cause.

The photo of a nearly 2-year-old Honduran girl crying as her mother is being patted down quickly went viral. It has also been used for a Facebook fundraiser to raise more than $18 million to help reunite families who have been separated. And the whole thing culminated in its placement in a photo illustration on the cover of Time magazine. The image features the girl against a red background, with President Trump towering over her and the words “Welcome to America.”

The implication was clear: This was a girl who, like 2,500 other children, was being separated from her mother. Time and many others made a decision to suggest that this was an example of Trump uprooting our American ideals.

But that’s not what it was. As The Washington Post’s Samantha Schmidt and Kristine Phillips report, the girl’s father says the child and her mother were never separated. U.S. Customs and Border Protection confirmed it, as did the Honduran deputy foreign minister.

However, that didn’t stop people from fundraising off of the photo of the crying girl, collecting over $18 million to “help reunite families who have been separated”. Really, $18 million for the approximately 2,500 children who are separated from their parents at the border for security reasons, many of which who already have open access to lawyers and legal help for free? How much of that money is really going to fund lawyers and how much is going into people’s pockets who never let a crisis go to waste in order to further enrich themselves.

This single picture, along with the photo of the Hispanic child in a cage that was proven to be fake and only used for a pro-amnesty protest, presents a perfect example of what is called “media propaganda”.

The mainstream media a pseudo-event, a planned catalyst to manufacture yet another round of hit piece headlines to not only damage Donald Trump, but to distract from the real headlines surrounding Trump’s success in North Korea and the Inspector’s General Report showing clear political bias within the FBI (despite the fact the report claimed otherwise). The media specifically chose this story because nothing tugs on the heartstrings of Americans than pictures of “suffering” children, as a similar strategy has resulted in millions of dollars being raised for starving children in Africa.

Perhaps a more accurate cover for TIME would have been the following: 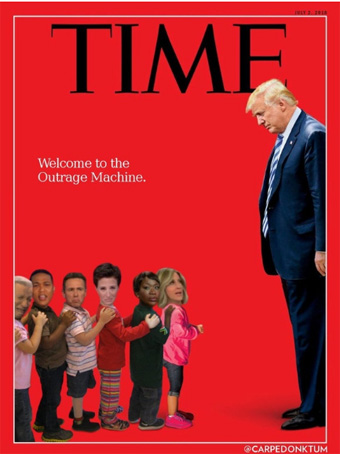 Or perhaps this one: 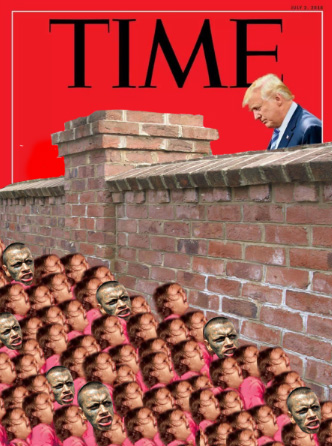 However, due to President Trump disarming the media’s feigned outrage by signing an executive order keeping illegal immigrant children detained with their parents, the left’s strategy of “getting Trump” has rapidly faded just like their past attempts using Stormy Daniels, Manafort, Cohen and Russian collusion.