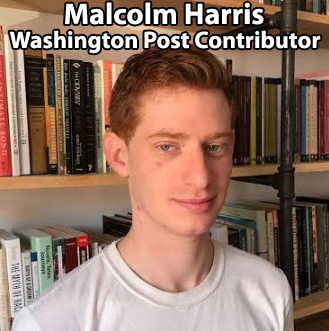 After far-left progressive and avid Bernie Sander’s supporter James Hodgkinson opened fire on Republicans preparing for a baseball game this morning, managing to wound House Majority Whip Steve Scalise who remains in critical condition, some of the most radical leftists in the media couldn’t contain their satisfaction at Republicans being targeted in an act of violence.

Malcolm Harris, who writes for far-left publication The Washington Post, was one such leftist who expressed his satisfaction at today’s shooting. Malcolm most recently published an article for The Washington Post on June 9th titled “Why do millennials keep leaking government secret?”

This morning, Malcolm took to twitter to celebrate and make jokes about the shooting of Congressmen Scalise.

The Daily Caller posted a screenshot of Malcolm’s first tweet (which has since been deleted), time stamped at 5:45am as he is likely in a different time zone than where the shooting occurred. In the tweet Malcolm tells readers to “keep crossing your fing”, as “a lot of Americans die from hospital errors”, apparently lamenting that Scalise is still among the living, and hoping the nation’s failing medical system under Obamacare will ultimately finish the job that the shooter started. Although that tweet was subsequently deleted, Malcolm follows up on his Twitter account by implying that because the Republican’s wish to fix the failing Obamacare system, essentially undoing Barrack Obama’s signature achievement, the shooter was justified in targeting Republican lawmakers as a form of “self defense”. And just to make sure that everyone gets the point he is enjoying the fact that a shooter attempted to mass murder Republicans, Malcolm Harris states, “you can’t use respect for human life to defend GOP house leadership, that’s just bad math.” 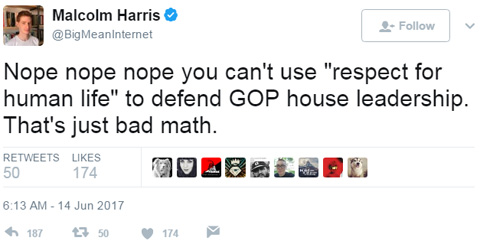 Although more well-known radical leftists are publicly expressing their sympathy for Steve Scalise, I have no doubt that there are others who secretly share Malcom’s pleasure at Republicans being targeted for execution, and their only disappointment is that additional conservatives were not hit. For real life examples backing up that statement, you need look no further than leftist comedian Kathy Griffin holding the bloodied, severed head of Donald Trump in a video and a performance of the play Julius Caesar by Shakespeare in the Park, portraying a Trump-like character being brutally stabbed to death.

Perhaps the left’s calls for “resistance” and violence will subside for a week or so while they play their role on the stage of public opinion, but I have a feeling that will not last for long.

Make no mistake, the anti-Trump media outlets like CNN and MSNBC may be putting on a act of solidarity for Scalise and other Republicans targeted by the shooter, but behind the scenes they are tipping the champagne glasses and sharing snide remarks in satisfaction of a job well done. After all, where else would they believe the portrayals of violence against President Trump, talks of “resistance” and calls for “taking to the streets” would lead except for a mentally unstable person to eventually actually act on those statements?

Recall former president Barack Obama telling his supporters, “If they bring a knife to the fight, we bring a gun.” Perhaps James Hodgkinson was simply inspired by Obama’s own words, and took action into his own hands, although establishment Republicans have yet to bring anything that would threaten the Democrats to any fight. In fact, they barely put up any fight in defense of President Donald Trump at all.