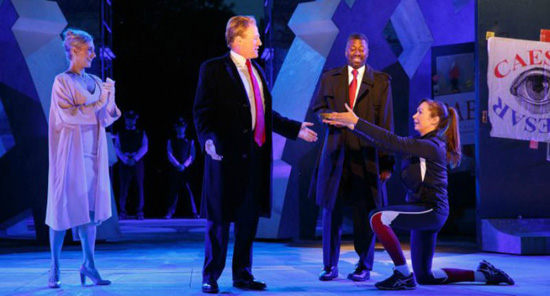 The annual performance of Shakespeare in the Park turned political when performing William Shakespeare’s classic Julius Caesar, as a main character in the play appeared eerily similar to the President of the United States, Donald Trump.

This year, the Roman dictator Julius Caesar was dressed in a modern black business trench coat, bright regal tie and had a hairstyle similar to Donald Trump. Ironically, the actor playing Caesar, Gregg Henry, just happen to play a rendition of Trump in the ABC show Scandal, and also stated similarities between Caesar and Trump.

Mediaite describes the scene where Julius Caesar is betrayed by his close friend Brutus, and subsequently stabbed to death on the floor of the Roman Senate. Apparently, just to make sure the audience knew that the character was meant to portray President Donald Trump, the actress that played Caesar’s wife also bore a striking resemblance to his wife Melania Trump, complete with a Slavic accent.

Those who have read Shakespeare’s play know how that opposition manifests itself (brace for spoilers): a group of conspirators — including his friends Cassius and Brutus — stab Caesar to death on the Senate floor.

The actor playing Caesar was dressed in a business suit, with a royal blue tie, hanging a couple inches below the belt line, with reddish-blonde hair — just like Trump,” Sheaffer told Mediaite.

“I always go to Shakespeare in the park, but I wasn’t expecting to see this,” Sheaffer said, adding that the script was mostly loyal to the original Shakespeare, and that there was no explicit reference to the American president, though the intention was “blatantly obvious.”

In the scene before Caesar is assassinated, his wife Calpurnia begs him to stay away from the Senate, claiming she is having nightmares of his murder. According to Sheaffer, the actress playing Calpurnia bore a resemblance to first lady Melania Trump — replete with a “Slavic accent.”

Sheaffer also noted that in the scene, the actor playing Caesar steps out of a bathtub stark naked, which she said struck her as disrespectful, and a “mockery of the office of the President.”

In the next scene the Trumpian Caesar is attacked by the Senators and stabbed to death as an American flag hovers overhead, according to Sheaffer. “They had the full murder scene onstage, and blood was spewing everywhere out of his body.”

“To be honest I thought it was shocking and distasteful,” Sheaffer continued. “If this had happened to any other president — even as recently as Barack Obama or George W. Bush — it would not have flown. People would have been horrified.”

“I mean it was the on-stage murder of the president of the United States,” she said.

Sheaffer pointed out that the play ends with Marc Anthony celebrating Brutus for his bravery, saving the Romans from Caesar’s rule. “The message it sent was that if you don’t support the president, it’s ok to assassinate him.”

“I don’t love President Trump, but he’s the president. You can’t assassinate him on a stage,” Sheaffer said.

Democrats, radical leftists and anti-Trump celebrities seem absolutely bent on the president’s destruction, as well as his ultimate demise by assassination. There has been no shortage of death threats, and even outright calls for attempts on the life of Donald Trump, as just last week B-list comedian Kathy Griffin was under fire for publishing a video of herself holding the severed, bloody head of Donald Trump.

Only days after the election last year, CEO of Packeetsled Matt Harrigan was fired due to making specific death treats towards Donald Trump on social media, even going as far as describing how he would use a sniper rifle and “find” Trump.

Although actors and comedians like Kathy Griffin claim this gruesome behavior is simply in the name of “comedy” and freedom of expression, I struggle to remember any such incidents taking place under Barack Obama’s presidency. Of course, if any celebrities were to even be slightly critical of Obama during that time, the person would blacklisted from society and savaged by the biased mainstream media.

The hypocrisy of the left truly knows no bounds, and although they often preach peace and tolerance, their inner thoughts are significantly more violent, but only towards those who do not share their radical beliefs. Compare these actions to other horrific political movements in history and you see stark similarities to totalitarian regimes of the past.

As the summer heats up and a series of protests are planned to call for the impeachment of Donald Trump, for no other reason than he wasn’t suppose to be elected in the eyes of leftists, I fear this country has only seen a preview of the violence the anti-Trump forces have planned. All in an effort to overthrow a democratically elected president who they disagree with.