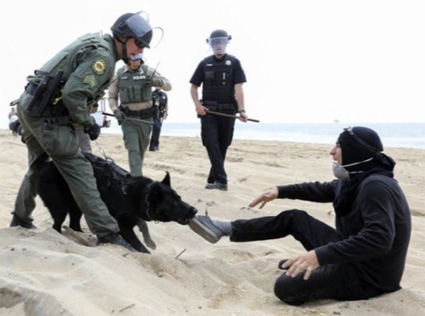 Over the weekend a pro-Trump rally took place in Huntington Beach, California, to show support for the president at a time when the mainstream media is ramping up their attacks and slanted reporting, doing everything they can to diminish Trump’s supporter.

Starting to drizzle on #MAGAMARCH in Huntington Beach. “We’re not snowflakes. We won’t melt,” a pro-Trump woman at the rally said. pic.twitter.com/FZDwiBcJGz

It should be no secret by now that peaceful pro-Trump supporters have been the target of vicious attacks dating back to the primaries last year.  For a brief review of just some of the violent attacks that took place on Trump supporters, which often go unreported by the mainstream media, see the following headlines:

Unfortunately, these acts of violence have only become more frequent as time goes on, as various anti-Trump groups funded by progressive organizations have emerged to suppress free speech.

By far the most violent of anti-Trump groups has been ANTIFA, who claim to be fighting against “fascism” yet they use fascist tactics themselves to suppress free speech at Trump rallies.

ANTIFA thugs showed up at the Huntington Beach rally this weekend, dressed in their usual black outfits complete with skinny jeans and hiding behind masks, attempting to intimidate the Trump supporters into dispersing.

Of course, the ANTIFA agitators also took the time to promote their communist agenda by wearing shirts portraying brutal communism under the Soviet Union.

At Huntington Beach, however, the ANTIFA members were met with fierce resistance and a brawl ensued which ended with one masked attacker having a police K-9 dog unleashed upon him. Ironically, with the ANTIFA thug being dressed in all black and wearing a mask like a burglar or robber, he likely resembles the dummies that police use to train their K-9 companions to attack intruders.  The K-9 dog’s job of identifying the bad guy was made very easy by the black garbed agitator.

The rally heated up when Jennifer Sterling, one of the organizers of the pro-Donald Trump rally reacts after getting hit with pepper spray in Huntington Beach. ANTIFA thugs pepper sprayed a Trump supporter out of nowhere, which is their favored tactic since they can quickly scurry away before retaliation takes place, but this time was different.  One Trump supporter fought back against the masked attacker, who ended up on the ground in the fetal position covering his head with his mask and hands, while the Trump supporter pummels him.

#BREAKING - arrests have been made after fight at #MAGAMARCH - 1 person pepper sprayed by anti-Trump protestor, 1 man punched. @KNX1070 pic.twitter.com/lab3FLdq33

You can notice a stark difference in appearance between the Trump supporter and the ANTIFA thug.  Now, who looks like the “good guy” and who appears as the “bad guy” dressed in all black in this picture? This protester was later chased down by police for launching an unprovoked pepper spray attack on Trump supporters, which is the only reason he was getting punched in the first place, and was subsequently arrested while police K-9 units did their job.

That wasn’t the only instance of violence against Trump supporters, as another black garbed ANTIFA thug punched a pro-Trump man who was draped in an America flag. Gee, I wonder who the bad guy is in this picture? 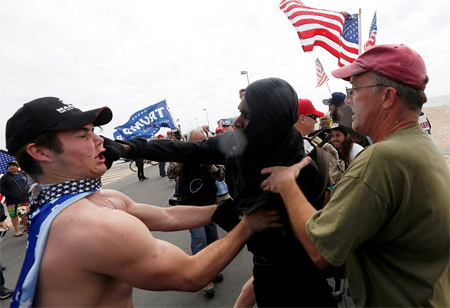 And again, with a long-haired protester attacking an older gentlemen. Overall, a satisfying outcome and goes to show that the ANTIFA thugs, like many violent gangs of protesters looking for trouble, are only able to muster any courage when they are in large groups. When they meet resistance from a patriotic gathering, however, they end up on the ground curled up in a fetal position while facing the wrath of patriots who only retaliate when attacked.

Often times ANTIFA protesters are only looking to incite an overreaction from Trump supporters so they can brand them as the violent ones, yet this time their plan backfired.

A video of the ANTIFA thug being chased down by the K-9 unit can be viewed below, which is extremely gratifying watching justice be served. (WARNING: Language):