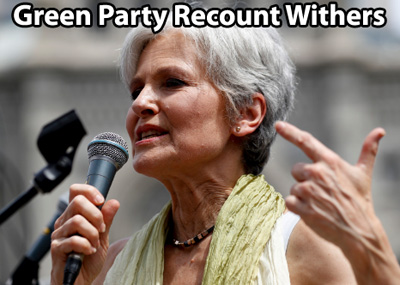 Green Party presidential candidate Jill Stein may have hit a serious roadblock in her recount efforts for Pennsylvania, as it’s being reported that she missed a key deadline.

Stein has already filed for a recount in Wisconsin on Friday, which appears to be moving forward, but according to her fundraising initiative she intends to request recounts in Michigan and Pennsylvania as well.  Her fundraising efforts have so far exceeded $6.2 million out of a $7 million goal, the estimated amount needed for a recount in all three states.

Now, seems like Stein and the Green party may get to pocket a significant amount of that money, as she has missed the deadline for a voter initiated recount in the state of Pennsylvania, which required that 27,000 affidavits be signed by voters to request the recount.  Pennsylvania is unique in this aspect, as a recount in the state can only be requested by actual voters residing there, or by a court order is evidence of fraud were to be presented.

Jill Stein released a video on Monday explaining that she is going to have to “jump through some hoops” in order to move forward with the recount in Pennsylvania.

Although Stein has missed this deadline, she can still file legal proceedings in hopes that the court will allow her recount to still take place.  According to Stein, her lawyer has already begun filing the papers in Pennsylvania for a legal hearing regarding the recount, but it will be up to her to prove there was a level of voter irregularities that warrant a judge ordering a recount statewide.

Even Hillary Clinton’s campaign, who joined the recount effort over the weekend, admitted that there is no concrete evidence of voter fraud or machine hacking.

Jill Stein is facing a serious hurdle in Pennsylvania, unless she somehow conjures up legitimate evidence over mass voter manipulation in the state and can convince the court that committing thousands of hours of labor to perform a recount is warranted.  If she doesn’t succeed, I wonder what will happen to all that extra money she raised from donors who she convinced her recount effort could actually make a difference?

Lawrence Otter, a lawyer for Stein’s campaign, said individual voters were filing petitions with boards of elections in several counties across the state seeking recounts in their precincts. Voters had already done so in Philadelphia, and Otter said they were expected to do so in Bucks County as well later Monday.

According to the Department of State, there were 9,163 voting precincts in Pennsylvania during the 2016 election. So Stein would need over 27,000 voters to file notarized affidavits, but it’s unclear if that avenue is even still available.

According to Wanda Murren, spokeswoman for the Pennsylvania Department of State, the deadline under the law for a voter-initiated recount at the county level had been Monday, Nov. 21. Many counties missed it but nearly half have already certified their results, precluding recounts there. That makes a lawsuit the only remaining option for initiating a statewide recount.

Complicating any recount effort is the fact that Pennsylvania is one of 15 states that use electronic voting machines that don’t have a paper-backed audit.

“The nightmare scenario would be if Pennsylvania decides the election and it is very close,” Lawrence Norden, an expert on voting machines, told the Los Angeles Times prior to the election. “You would have no paper records to do a recount.”

Even if Stein were able to overcome the odds and initiate a statewide recount, it’s doubtful Clinton would be able to overcome Trump’s 70,638 lead in Pennsylvania. From 2000 and 2015, the outcome of the election was changed in just three of 27 elections, according to FairVote, a nonpartisan electoral reform group that researches elections. The largest swing occurred in Florida in 2000, when 1,247 voters for George W. Bush were flipped to his opponent, Al Gore, which wasn’t enough to overturn the state’s results.