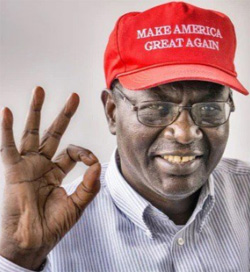 Barack Obama’s half brother Malik Obama, who lives in Kenya and became an avid supporter of Donald Trump and often uses Twitter to express his opinions, has once summed up America’s current political issues perfectly.

During the election Malik, much to the disdain of his half brother Barack, would tweet often in support of Trump’s policies and publicly stated his intention to vote for him (he has American citizenship).

Malik Obama has said that President Trump “talks from the heart and what he says makes sense, he’s not a phony, and I can’t stand phonies”.  If Malik can’t stand people who are fake, then he must not be very fond of his half brother Barack.  Malik even threw his support behind Trump’s slogan saying, “Why shouldn’t America be first, what’s wrong with that?”

Malik even joined the #DumpStarWars movement on Twitter after one of the writers for the new Disney films used the movie’s evil Empire as a comparison to Donald Trump and his policies.

Earlier today, Malik Obama took to twitter once again to offer his take on President Trump’s temporary ban on refugees by saying, “We don’t lock our doors before bed because we hate people outside. We lock them because we love the people inside.”

We don’t lock our doors before bed because we hate people outside. We lock them because we love the people inside.

Malik’s statement should really hit home to the Hollywood liberals and billionaire executives like Mark Zuckerberg who all live in their secluded mansions surround by walls and security protection.  Yet, in their opinions, the average American family does not deserve similar protections when residing in their own country, as they adamantly oppose any policy that increases the strength of our borders.

“Wall for me, not for thee” should be the slogan for every elitist liberal who has the gall to dictate to the working class, claiming they should be embracing refugees with open arms and forgo all thoughts of their own safety.  Easy to say when you’re surrounded by armed guards, security systems and walls for you and your families.

If the Hollywood liberals and whining journalists really want to be taken seriously regarding their open immigration beliefs, each and every one of them should sponsor and take in a random family of refugees (and all their 9 kids too), in order to prove their virtues to all us “deplorables” who only wish to live in relative safety.