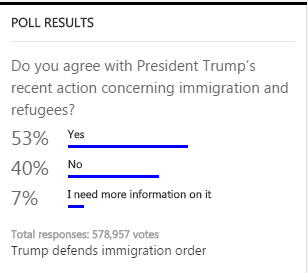 As of 10:36pm (Eastern Time) on January 30th, and out of 578,957 votes, a total of 53% of respondents indicated that they support President Trump’s temporary ban on refugees from countries with a high level of terrorist activities.  Only 40% responded that they do not support Trump’s executive order and 7% said they need more information on it.

The significance of this poll is that it drastically contradicts the mainstream media’s narrative that the majority of the nation is opposed to Trump and almost all of his policies, when in reality it’s only a small portion of organized (and paid) protesters bent on fighting any and all of the president’s efforts.

MSN isn’t the only poll that shows a majority of people supporting Trump’s refugee policies, as Rasmussen polling also showed that 57% of likely voters agree with the president’s executive order as well.

Judging by the reaction from the left, and even some traitorous Republicans like John McCain and Lindsay Graham, if you didn’t actually read Trump’s executive order on refugees you would think that he just shut down the borders to every country that has a single Muslim in it. Former president Barack Obama chimed in, even though he said he wanted to “stay quiet for a while” after leaving office, slamming Trump’s decision and offering his support for the protesters (community agitators).

I guess that “staying quiet” didn’t last long, as Obama just has to inject himself into the spotlight somehow.

Even Senate Minority Leader Chuck Schumer was “crying” during his statement on Trump’s executive order, calling his action “mean spirited”. So, according to the left,  that big meanie Trump is at it again with his hard work towards making America safe and secure for all citizens, even the ones protesting his efforts.

These polls in support of President Trump are showing what the mainstream media doesn’t want the public to see, as they feverously push the false narrative that Americans everywhere are rising up to protest the president’s temporary refugee ban.  Yet, there was silence as Obama banned refugees for 6 months in 2011 from Iraq after two Iraqi refugees were arrested in Kentucky for previously targeting U.S. troops in Iraq.

The dinosaur mainstream media has gone into overdrive again, proving that they are completely disconnected from the pulse of the American public and voters, in attempts to drive their liberal political agenda.  After their crushing defeat in last year’s election, I suppose all the media has to hang on to are their opposition efforts to everything that voters agreed with during President Trump’s campaign. 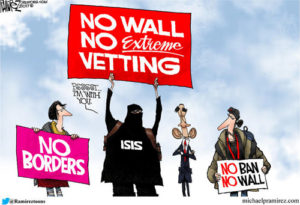