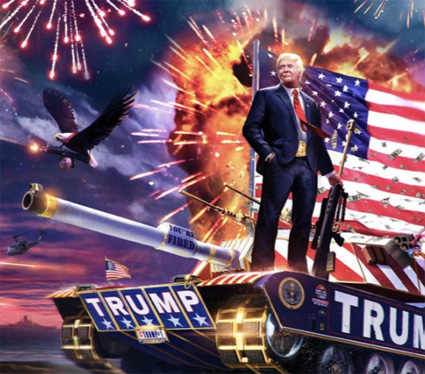 Last night Donald Trump went on a Twitter offensive against the hypocrisy of the media and intelligence community, who have been escalating their attacks on Trump for what so far have been fantastical claims of collusion with the Russians, and questioned why no one is investigating the Clintons or their associates for their questionable dealings with Russia.

Bouncing back from the Republican healthcare bill’s failure on Friday, last night Trump tweeted “Why isn’t the House Intelligence Committee looking into the Bill & Hillary deal that allowed big Uranium to go to Russia, Russian speech….”

Why isn’t the House Intelligence Committee looking into the Bill & Hillary deal that allowed big Uranium to go to Russia, Russian speech….

Trump followed with another tweet minutes after his first in which he said, “…money to Bill, the Hillary Russian “reset,” praise of Russia by Hillary, or Podesta Russian Company. Trump Russia story is a hoax. #MAGA!”

…money to Bill, the Hillary Russian “reset,” praise of Russia by Hillary, or Podesta Russian Company. Trump Russia story is a hoax. #MAGA!

The president pointed out what are very real connections with the Russians or Russian interests by the Clintons, along with Hillary’s former campaign manager John Podesta, in which they profited greatly from various dealings with their Russian comrades, often at the expense of American resources.

With the media hysteria over claims of Trump-Russia connections, in which any concrete evidence has yet to emerge, you would think at least one major publication would be digging into the Clinton’s extensive profits from their Russian deals.

The biggest dealing came when Hillary Clinton was Secretary of State, in which she approved a deal that resulted in the Russians owning 20% of America’s uranium production, but not before Russian shareholders provided over $145 million in donations to the Clinton Foundation prior to Hillary approving the process.

Of course, Hillary’s husband Bill Clinton also got in on the lucrative Russian deal and received a staggering $500,000 for a brief speech in Moscow, which even The New York Times questioned in 2015. 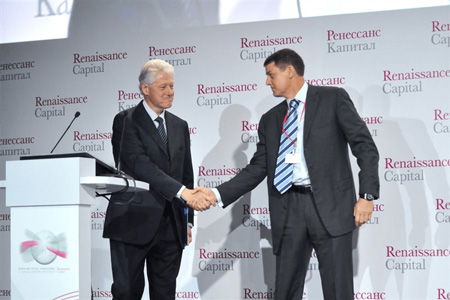 For those unfamiliar with the Clinton’s involvement with the Russian owned company obtaining America’s uranium rights, below is a brief overview:

–Bill and Hillary Clinton had helped a Canadian financier named Frank Giustra and a small Canadian company obtain a lucrative uranium mining concession from the dictator in Kazakhstan;

–The Russian government came calling and sought to buy that Canadian company for a price that would mean big profits for the Canadian investors;

–For the Russians to buy that Canadian company, it would require the approval of the Obama administration, including Hillary’s State Department, because uranium is a strategically important commodity;

–Nine shareholders in Uranium One just happened to provide more than $145 million in donations to the Clinton Foundation in the run-up to State Department approval;

–Some of the donations, including those from the Chairman of Uranium One, Ian Teler, were kept secret, even though the Clintons promised to disclose all donations;

President Trump also mentioned Hillary’s former campaign manager, John Podesta, in his tweet which is a reference to the revelation that he failed to disclose ownership of 75,000 shares in a Kremlin-financed company during his time in the Obama White House in 2014.  Now, questions have arisen as to if John Podesta violated federal law by failing to disclosing his Russian ties.

These events aren’t just speculation, rumors or intelligence from “anonymous sources” as the media likes to use when accusing Trump of having ties to Russia. Instead, they are absolute facts the media and intelligence community have turned a blind eye to, since they don’t fit the current Democrat attack narratives on Trump.

If the press or intelligence communities were actually concerned about Russian influence in American politics, there is no better place to start than by investigating Hillary Clinton, her husband Bill Clinton (who is a rapist) along with their various associates and money making foundations.

However, the media’s goal isn’t to actually shed light on shady dealing between American politicians and Russia, but rather to dethrone a president whose goal is nothing more than to Make America Great Again, which threatens the massive money making operations of the globalist elite.