Alex Jones of Infowars, who couldn’t be happier after the inauguration of President Donald Trump, produced a video of the actual crowd size at the national mall on inauguration day.

Before the inauguration ceremony even started, CNN started releasing pictures and retweeted a comparison picture from a New York Times reporter (of course) of the crowd size versus Obama’s turnout in 2009.  Note that Washington D.C. is overwhelmingly made up of liberal Democrats, so of course a Democrat president is going to have a massive turnout because it’s easier for locals to attend.  The reporter also fails to mention what time the picture of Obama’s inauguration was taken, but I doubt it was taken first thing in the morning.

The problem is that the guests hadn’t fully settled in due to security delays and protesters at the entry gates, but that didn’t stop CNN from claiming that Trump had a shockingly low turnout for his big day. 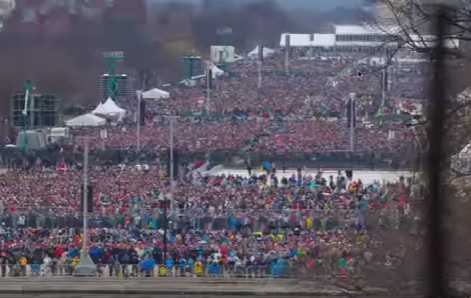 Ironically enough, the following video as shot by CNN from an alternative angle and happened right before Trump’s swearing in ceremony was about to begin. You can see as the camera zooms in that the back portions of the national mall are now filled in with spectators, versus the picture from earlier in the morning that was being circulated around the fake news networks in attempts to claim that hardy any showed up.

The portion of the broadcast that shows the crowd at the inauguration of Donald Trump starts at the 3:15 mark.

CNN was undone by their own phony reporting, as this video clearly contradicts the earlier picture that shows the back areas of the mall partially empty at an earlier time in the day before the main inauguration event started.

Unfortunately the mainstream media will simply move to the next anti-Trump story their bias reporters come up with and latch onto it with everything they’ve got, but with each fake news story they produce their credibility get’s lower while the public becomes more aware.

Malik Obama Joins #DumpStarWars After Writer Compares Empire to Trump Supporters
McCain Shamed After Begging Followers to Help Him Reach 3 Million on Twitter, Only to Lose 20k Inste...
Barack Obama ‘In The Bush’ Portrait Painted by Artist Who Portrayed White Woman Beheaded by Strong B...