It was only a matter of time until someone blamed their inability to find a date on Donald Trump, as throughout the election it was reported that partner’s difference of political opinions was causing massive strains on their relationship.

In an editorial for the Washington Post, a single mother claims that only 3 months ago she was going on 6 dates in a single week, deciding she was finally “ready to look for a partner”.  Although if you’re going on that many dates in one week, maybe you’re looking in the wrong places for your next relationship, as I couldn’t imagine trying to really get to know someone when you’re juggling around 6 different people.

This single mother who, when she thought Hillary Clinton was going to win the election, was perfectly able to at least attempt to date another person, can no longer muster the desire due to Donald Trump’s victory.  As the author puts it, “I can’t, I just can’t.”

In August, I went on six dates in one week. I had decided that I was ready to look for a partner. Enough of this dating unavailable men a half-decade younger than me. They’d never seriously consider a relationship with me, my two children and our needy dog. No. I wanted to find an equal. A man who wouldn’t feel the need to step in and rescue me. I didn’t need rescuing.

But I knew deep down that was only partially true. I often felt the sort of loneliness that settled in my stomach, starting from a chaotic afternoon with my children, lasting well into the night when I pulled covers tight around my chin.

I’ve been on my own with my kids for most of the past decade. I have no idea what a supportive partner would even look like in my house. I imagined it as some sort of potluck: We’d both bring the things we have to offer and place them on the table. My ability to multitask and keep everyone’s schedules on track would sit next to his ability to fix cars, cook or read books in silly voices. Then we’d feast.

Of the six first dates I had in August, two men seemed promising. One of them met me at a brewery. We chatted happily through two beers. Finally I was out of a job interview mode I’d fallen into while sitting across from strangers. I relaxed. I laughed. And it wasn’t the laugh I did just because. It was real.

We dated for a few weeks before he admitted he wasn’t ready for something serious. Two days later, the other of those good dates called me out of the blue. We talked for a while, and I asked him to dinner. Things were falling into place. A feast was laid out on the table, and it looked delicious.

But two weeks later, the election happened. Once it was clear that Donald Trump would be president instead of Hillary Clinton, I felt sick to my stomach. I wanted to gather my children in bed with me and cling to them like we would if thunder and lightning were raging outside, with winds high enough that they power might go out. The world felt that precarious to me.

My oldest came out of her room the next morning to show me the money the Tooth Fairy had left her. She’d unexpectedly had to have a tooth pulled, and so bravely went through it that I said, “Just think: You’ll always remember the day you got a tooth pulled with the day we elected our first female president.”

When I told her Trump had won, she protested: “But Mom. You said Hillary was going to win.”

“A lot of people thought the same thing,” I said. I hugged her, a little scared to send her to school, out into the big sky country of the red state where we live.

So because Donald Trump “unexpectedly” won the election over Hillary Clinton, this liberal-minded mother felt the need to hug her children close and protect them as if a natural disaster was raging outside their windows.  Perhaps this sort of overreaction to not receiving the outcome that you wished for has something to do with not being able to find a stable partner in a long term relationship?

Perhaps The Washington Post, who published horror stories about Trump calling him “a bigot and a racist”, while also making comparisons of him to Hitler, could have something to do with Clinton voters drastically overreacting to his election victory.

Twenty minutes later, at a stoplight on the way to drop off my 2-year-old daughter at day care, steam started creeping out from under the hood of my car. Fortunately my mechanic’s shop was nearby.

My radiator was cracked in two places, right at the top. “I really wouldn’t feel comfortable with you driving it,” one of the mechanics said. Luckily a new radiator could easily be obtained and installed that day. I thanked them.

I didn’t start crying until I had crossed the street to walk home. We had a few miles to go, so I carried my daughter. I didn’t mind carrying her; I still had that urge to cling to her and keep her close. It was cold that morning, but the sun started to warm us enough to remove our hats. Halfway home, my tears stopped, and my despair grew to appreciation.

That urge to cling to my family while keeping our foundation strong didn’t mesh well with continuing to date the man I’d been seeing. He also has a daughter. He, too, had been feeling a lot of the same emotions I was experiencing: hopelessness; fear; uncertainty about the future; panic over having to talk to my 9-year-old about anything that might come up at school, or what to do in the instance of sexual assault. But I couldn’t reach out to him anymore. He was too new, too unfamiliar.

My focus had to be on my community of friends that are my family. I need to fiercely love the people close to me instead of learning to love someone new. To reach out to others could weaken the bonds that hold my family together.

I’ve lost the desire to attempt the courtship phase. The future is uncertain. I am not the optimistic person I was on the morning of Nov. 8, wearing a T-shirt with “Nasty Woman” written inside a red heart. It makes me want to cry thinking of that. Of seeing my oldest in the shirt I bought her in Washington, D.C., that says “Future President.”

There is no room for dating in this place of grief. Dating means hope. I’ve lost that hope in seeing the words “President-elect Trump.”

If this article wasn’t featured on The Washington Post, I would almost believe it was a parody or satire, but unfortunately this isn’t the only Clinton voter to feel as if the world is literally coming to an end.

The real underlining issue in this story is the person’s inability to have any “hope” in the future due to her candidate not winning the presidential election as she expected, and her belief in the mainstream media’s narrative of Trump being the doom of everything that is progressive.

If she would have taken some time to watch a few Trump rallies, listen to his policy speeches and engage his supporters, perhaps she would have realized that he’s not the monster many liberals perceive him to be, but just a man who loves America and has a vision for our success that may be different from your own.

The very fact that some portions of people’s lives are crippled due to the election results should also be a very concerning trend in our nation.  As many college students prove on a daily basis, our education system is failing to prepare them for controversial viewpoints, healthy debate and accepting your loss in order to move on with life.  We’re always going to encounter adverse situations, but what separates those who become successful from those who do not is their ability to accept it and move forward in life, not letting a disappointment dismantle their capacity for a relationship. 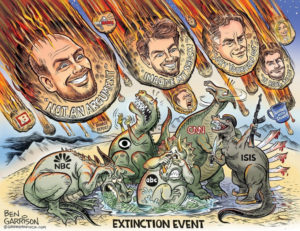