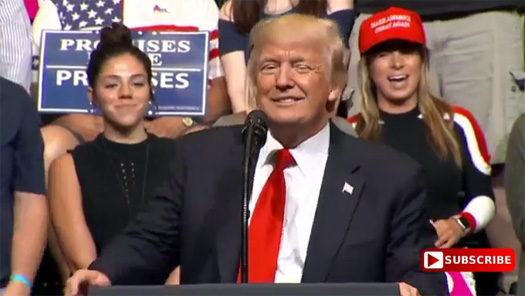 President Donald Trump spoke at a rally in Cedar Rapids, Iowa, tonight and proclaimed that he will soon be calling on Congress to pass legislation making it illegal for immigrants to receive public assistance within their first 5 years of entering America.

Most people may recognize the fact that immigrants, especially those who are illegal, are often times coming to America with little more than the cloths on their backs. This means they will need immediate housing, food benefits and cash assistance courtesy of the American taxpayer. The amount of these benefits received greatly depend on how many children the household has, which compounds the expense since immigrants tend to have larger families than natural born citizens.

A 2015 study published by the Center for Immigration Studies quantified the massive amount of money that immigrants require upon arriving in America, regardless of if they enter illegally or not. Below are some of their findings:

In essence, the vast majority of immigrants have little to no education, but have much higher amounts of children compared to the average family, resulting in a massive amount of benefits being awarded to keep them afloat.

President Trump, ever the businessman focused on saving the American taxpayer’s money, told the audience at his rally in Iowa that he intends to lobby Congress for a law barring immigrants from public assistance for their first 5 years in the country.

“The time has come for new immigration rules that say … those seeking immigration into our country must be able to support themselves financially and should not use welfare for a period of at least five years,” Trump told a campaign-style rally in Grand Rapids, Iowa.

Trump’s proposal would build on the Personal Responsibility and Work Opportunity Reconciliation Act of 1996, which allows federal authorities to deport immigrants who become public dependents within five years of their arrival. Many of that law’s provisions were rolled back during the George W. Bush and Barack Obama administrations, but Trump’s proposal would make more categories of federal benefits off-limits to immigrants.

Foreigners with non-immigrant visas and those who don’t have legal status are generally prohibited from those benefits altogether.

Trump’s proposal would also prevent the admission of people who are likely to become so-called “public charges” within five years of their arrival. The concept of “public charge” has been part of U.S. immigration law for over a century. It allows the government to bar entry to individuals who are likely to seek public assistance. Trump is expected to propose toughening up the rules regarding “public charge” and ensuring that they are enforced.

The administration circulated a draft executive order to make Trump’s proposed changes earlier this year. However, Trump’s remarks Wednesday indicated that he wants Congress to codify his plan into law.

Needless to say, this bill would contradict the goals of the Democratic Party, which is to deliver as many free benefits to the public as possible in attempt to secure future votes. After all, how many people would vote against the party that is feeding, housing and clothing them?

Trump will likely face an uphill battle within his own party, as many establishment Republicans are just as enthusiastic about government handouts as the Democrats.

I have a feeling that even though illegal immigration has reportedly decreased by 73% since Trump took office, we will see the number decline even further if illegal immigrants realize they will not be given a free ride just for smuggling themselves over the border. It will also vastly increase the quality of legal immigrants, ensuring that they are coming to America for the opportunities the country offers, rather than to take advantage of the system.

Trump’s full speech in Iowa can be viewed below: